Workshop Theme: ‘Not Reinventing the Wheel – Research and Collaboration between Institutions’.

The aim of the workshop was to review the various maths supports available in Ireland, and decide on how best to move the community and the network forward through collaboration, including sharing of resources, ideas and initiatives as well as developing resources and joint research proposals.

Thanks to the generosity of the All Ireland Society for Higher Education (AISHE), the National Centre for Excellence in Mathematics, Science Teaching and Learning (NCE-MSTL), the National Digital Learning Resources (NDLR), the Irish Mathematics Society (IMS), and the UCD School of Mathematical Sciences, there was no charge for attendance/participation and lunch was provided.

Two keynote speakers from the UK talked on the benefits of collaboration amongst different institutions for the development of new mathematics learning supports and initiatives.

The first keynote presentation was by Professor Tony Croft, Loughborough University and director of sigma, the Centre for Excellence in Mathematics and Statistics Support in the UK.

Abstract: In the UK, the sigma centre for excellence in university-wide mathematics and statistics support, based at Loughborough and Coventry Universities, has worked hard to establish a network of professionals associated with this important and growing field. The sigma-network, formed in 2010, disseminates good practice, shares expertise, stimulates the wider development of mathematics and statistics support provision, and works to support those individuals striving to improve the student experience. In his talk sigma director Tony Croft (Loughborough) charted the development of the sigma-network, and described some of the many aspects of its work. He offered his insight into ways in which we can work together to enhance mathematics support networks. He then presented several ideas intended to encourage discussion about ways in which delegates may wish to develop their own centres.

Here is a picture of Professor Tony Croft being introduced to the attendees by Dr. Ciarán Mac an Bhaird The second keynote presentation was by Dr. Jane White, University of Bath and committee member of sigma-south west, a regional hub for sigma in the UK.

Here is a picture of Dr. Jane White in the middle of her presentation. 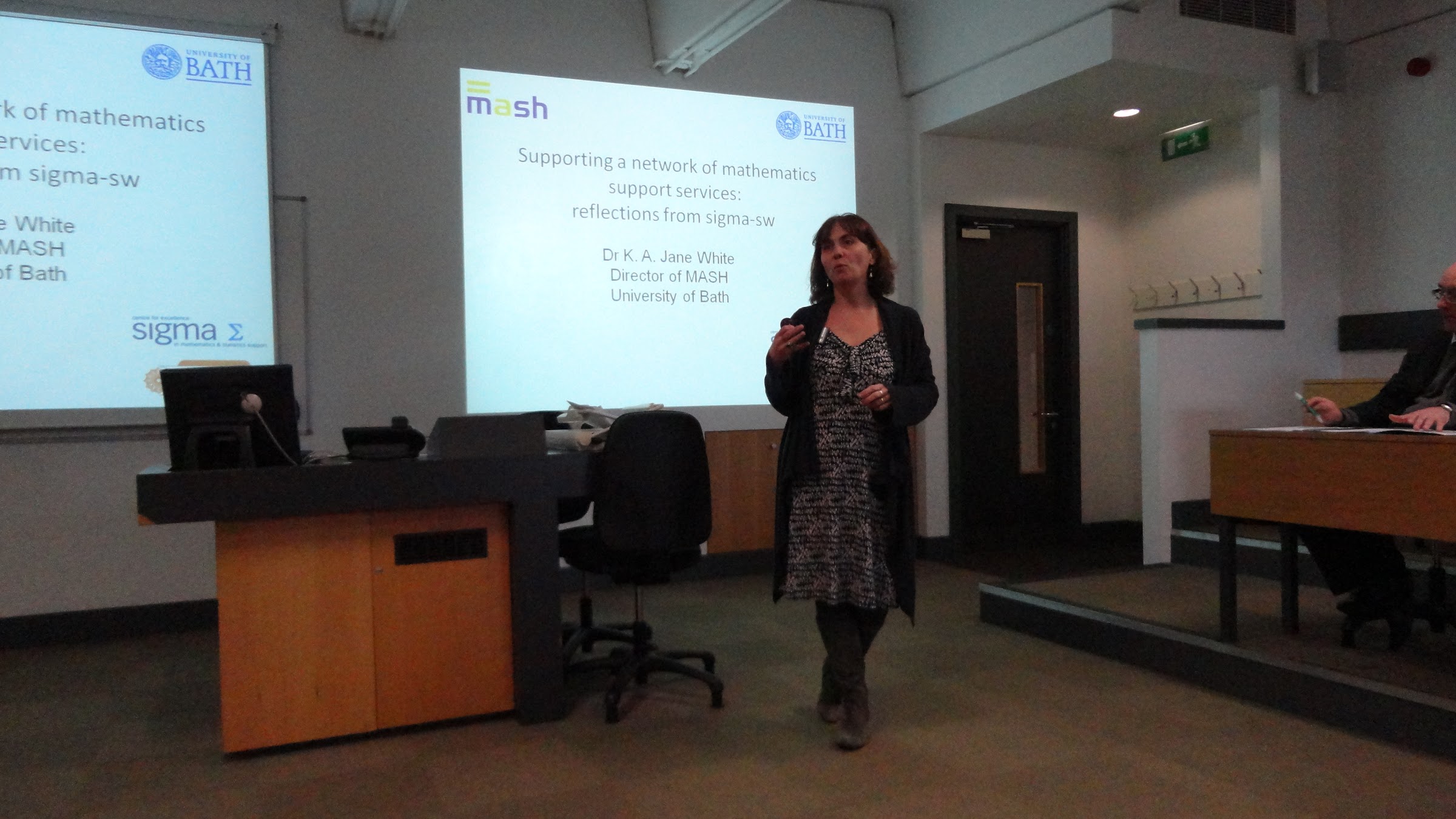 All participants submitted brief proposals for contribution to the workshop. Those who are involved in mathematics learning support in third level institutions submitted a one page document describing one innovation/intervention/initiative that they have tried in their institution relating to mathematics learning support. In this document participants detail the outcomes, advantages and disadvantages of the initiative. A pdf containing all the submissions can be downloaded here.

At the workshop, each proposer gave a two minute presentation introducing themselves and talked about their submission. There was a general group discussion on the various projects and potential collaborative projects.

The committee gave a presentation on their progress to-date and updated participants on initial results of the mathematics learning support evaluation survey carried out by several institutions last semester.

The official IMLSN Website and the winner of the student logo competition were both announced. The winning logo was designed by Ruairí Nealon from the University of Limerick. It appears on the top left hand corner of this webpage and will be included with all official IMLSN documentation. The IMLSN are grateful to Oisín Doyle for his work on producing the final image.The competition was open to all undergraduate students at third level institutions in Ireland who were studying some level of mathematics and/or statistics in their degree, and the submissions can be downloaded here.

The AGM was held at the end of the meeting where we discussed the formation of the new IMLSN committee and IMLSN constitution was discussed and ratified. In particular we discussed what direction the network should take, and other issues such as official network membership etc. The initial committee were in place for almost two and a half years and were thanked for their efforts. A discussion was also held with the keynotes speakers as regards the best steps forward for the IMLSN.

Further photographs of the workshop can be viewed here.